My migraine is back to haunt me and I am writing this shortly before hitting the sack.
We are going to Tajikistan and we are going to enjoy its second most famous dish: Qurutob.

The first national dish is plov, which you can also find in Uzbekistan. Qurutob, however, is a merely Tajik dish. It consists of yoghurt sauce, bread, vegetables – usually some fried onions and tomatoes – and meat.

The name comes from Qurut, the dried salty yoghurt balls, that are dissolved in water. It is a very simple dish. It gives you the necessary nutrients to be able to walk your fields outside and tend to your animals, even in cold temperatures.

The Tajik cuisine is a very poor one, being Tajikistan one of the poorest countries in the world, its cuisine is equally scarce. Years of Soviet domain, followed by years of civil war, have not been kind on its cuisine.

There are not many recipes of Qurutob around. It is a dish that is shared in the family and eaten daily. It consists of the few ingredients that are to be found in the rough Tajik climate, yoghurt, bread and a few vegetables. In the cold winters, onions are the toughest vegetables that can withstand the blistering weather. You can occasionally add some meat or more vegetables, that grow once the summer spring is back.

If you want to make the dish yourself, you need time (and with my migraine, a great husband that helps you out, while you lay in bed). However, the wait is worthwhile.
The Fatir is a standard bread in Tajikistan which resembles a rough puff pastry and is dry and stodgy. Don’t worry, it has to be like that.

For today’s dinner, I followed the recipe from two amazing pages, that described the steps in detail and did a great job.

1. foodperestroika gives you an amazing step by step recipe for the whole dish, from the bread, to the yoghurt balls all the way to the final masterpiece.

Start by making the Fatir, the bread: Mix the flour, water and salt and work well with your hands. Make a ball, flatten it and cover it with plastic foil. Refrigerate for a few hours.

Preheat your oven at 180º C and take the dough out of the fridge. On a well floured working surface, roll out the dough into a rectangle. Brush it with butter and sprinkle with some flour. Cut it into smaller squares that you will shape into round breads. Bake until golden, usually about 30-40 minutes.

In the meantime, proceed with the Qurutob. In a pan, heat the yogurt. Add the water and the salt. On a medium heat, cook for 30 minutes, while stirring often.

Sauté the onion in oil in another pan until translucent.

In a salad bowl, place the fatir bread torn into pieces. Pour the yogurt over it. Then add the onions with the oil, the tomatoes, the spring onions and the cilantro. Season with salt, if necessary. 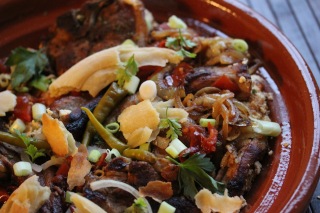 As for the dish itself, it was very rich. We obviously ate it with our hands from the common plate. It was very filling, the flavour was really nice, especially the meat. To be honest, it was the first time ever, I made yogurt balls out of plain yogurt. That was a fun experience!

View all posts by raffimatcha

Easy Cooking of Recipes from around the world.
Eating as an Adventure.
Exploring the world, close and far.

Here you can see my world filled with small things of beauty, through the lenses of an enthusiastic cook-traveler, Raffi.
read more